Another full rotation around the sun (as one focus and another focus, in compliance with Kepler’s first law) has been completed! Although, not all the planets do their full rotation in ~365.25 earth days. Venus does it in 255 days, Mars does it in 687 and Neptune does it in a whopping 165 earth years. The trend seems to be, the further away from the sun a planet is, the longer the orbit (as shown below).

In the 17th century, nobody knew the orbital periods of the planets, although, Johannes Kepler predicted this with his third law of planetary motion. This law was published after his first two laws and has been revolutionary ever since.

If you want a more in-depth understanding the law is as follows:

Although if we chose our units as earth years and astronomical units then we get a much simpler equation:

m1: Mass of the star

m2: Mass of the planet

Kepler’s laws of planetary motion are great as they are but they aren’t limited to planets orbiting stars, they can apply to anything from the moons of Jupiter, to stars orbiting the galactic centre of a galaxy.

This is where dark matter comes in. Astronomers have observed stars orbiting the galactic centre of galaxies although the results don’t line up with Kepler’s law.

Here is a graph of the orbital speeds of different planets in our solar system: 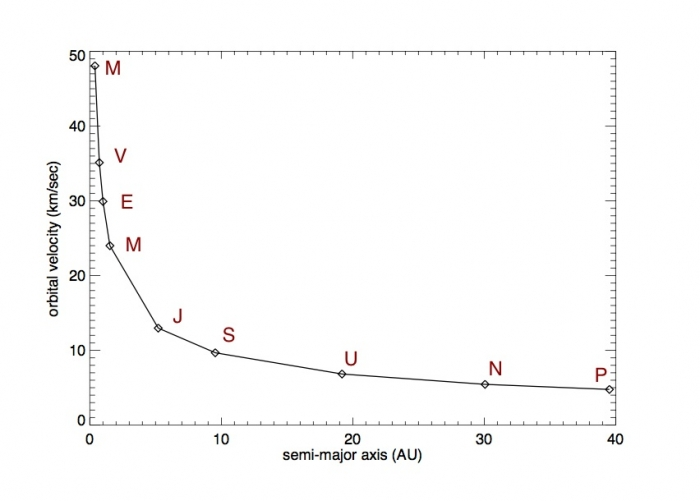 And here is a graph of stars speed and their distance from the galactic centre:

Astronomers had three possible explanations for this anomaly:

So astronomers collected more data and gained the same results. This means that it has to be one of the bottom two options. Attempts were made to amend Kepler’s theory, as Einstein did to Newton’s theory of gravity, but none matched the data. The general scientific community now believes that there are particles that don’t interact with light and surround each galaxy. It is now believed that dark matter makes up 95% of each galaxy. This is represented below.

Using the CERN super hadron collider in Switzerland, many tests have been done to try and find these ‘ghost’ particles and has disproven some theories although is not currently powerful enough to test anymore. CERN is currently being upgrading and will be able to test more theories after work has been completed later this year.

What do you Think of beginningastronomy.net?

This website uses cookies to improve your experience while you navigate through the website. Out of these, the cookies that are categorized as necessary are stored on your browser as they are essential for the working of basic functionalities of the website. We also use third-party cookies that help us analyze and understand how you use this website. These cookies will be stored in your browser only with your consent. You also have the option to opt-out of these cookies. But opting out of some of these cookies may affect your browsing experience.
Necessary Always Enabled

Any cookies that may not be particularly necessary for the website to function and is used specifically to collect user personal data via analytics, ads, other embedded contents are termed as non-necessary cookies. It is mandatory to procure user consent prior to running these cookies on your website.